“The attention mechanism allows the model to create the context vector as a weighted sum of the hidden states of the encoder RNN at each previous timestamp.”

“Transformer is a type of model based entirely on attention, and does not require recurrent or convolutional layers”

Context vector is the output of the Encoder in an Encoder-Decoder network (EDN). EDNs struggle to retain all the required information for the decoder to accurately decode. Attention is a mechanism to solve this problem.

“Attention mechanisms let a model directly look at, and draw from, the state at any earlier point in the sentence. The attention layer can access all previous states and weighs them according to some learned measure of relevancy to the current token, providing sharper information about far-away relevant tokens.”

GPT: Generative Pre-Trained Transformer. Unlike BERT, it is generative and not geared to comprehension, translation or summarization tasks, but instead writing or generative tasks. It uses unsupervised learning to train a deep neural network with a seq2seq model. It does not use reinforcement learning (feedback from environment) or supervised learning. It uses “masked self-attention” to predict the next text during training on its dataset.

The term “generative” is used to emphasize GPT’s ability to generate new, original text, rather than just processing or analyzing text that already exists. A generative model is a type of machine learning model that is trained to produce data, such as text, images, or music, that is similar to the data it was trained on. GPT is a generative model because it is trained on a large corpus of text data and can then generate new text that is similar to the text in its training data. This allows GPT to produce human-like text on a wide range of topics, which can be useful for a variety of applications, such as language translation, text summarization, and question answering.

A “transformer” is a type of neural network architecture that was introduced in 2017. It is a deep learning model that is used for natural language processing tasks, such as language translation and text summarization. A transformer consists of two main components: an encoder, which processes the input text, and a decoder, which generates the output text. The encoder and decoder are connected by a series of attention mechanisms, which allow the model to focus on different parts of the input text as it generates the output. This architecture allows the model to process input text in a parallel, rather than sequential, manner, which makes it more efficient and effective than previous models. The transformer architecture has been widely adopted in natural language processing and has been shown to be highly effective for many tasks.

GPT was released June 2018 by OpenAI.

BERT was released Oct 2018 by Google.

This attention concept looks akin to a fourier or laplace transform which encodes the entire input signal in a lossless manner in a way that allows sections or bands of it to be referred to later. Although implemented differently it’s a way to keep track of and refer to global state.

BERT and GPT are both based on the Transformer ideas. BERT is bidirectional and better at ccomprehending meaning from the whole sentence/phrase whereas GPT is better at generating text.

“The most important distinguishing feature of this approach from the basic encoder–decoder is that it does not attempt to encode a whole input sentence into a single fixed-length vector. Instead, it encodes the input sentence into a sequence of vectors and chooses a subset of these vectors adaptively while decoding the translation. This frees a neural translation model from having to squash all the information of a source sentence, regardless of its length, into a fixed-length vector. We show this allows a model to cope better with long sentences.”

This description makes it more like a wavelet transform, that does auto-correleations of a signal at different levels of granularity to make sense of it.

Omnisci is a columnar database that reads a column into GPU memory, in compressed form, allowing for interactive queries on the data. A single gpu can load 10million to 50million rows of data and allows interactive querying without indexing. A demo was shown at the GTC keynote this year, by Aaron Williams. He gave a talk on vehicle analytics that I attended last month.

In the vehicle telemetry demo, they obtain vehicle telemetry data from an F1 game that has data output as UDP, 10s of thousands of packets a second – take the binary data off of UDP, and convert it to json and use it as a proxy for real telemetry data. The webserver refreshes every 3-4 seconds. The use case is analysis of increasing amounts of vehicle sensor data as discussed in this video and described in the detailed Omnisci blog post here.

Programming of the blocks is done through the UX with StreamSets which is an open source tool to build data pipelines –  a cool demo of streamsets for creating pipelines including kafka is here.

The vehicle analytics demo pipeline consisted of UDP to Kafka, Kafka to JSON, then JSON to OmniSci via pymapd .  Kafka serves as a message broker and also for playback of data.

Based on the the GPU loaded data, the database allows queries and stats on different vehicles that are running.

The entire system runs in the cloud on a VM supporting Nvidia GPUs, and can also be run on a local GPU box.

Lacework Polygraph is a Host based IDS for cloud workloads. It provides a graphical view of who did what on which system, reducing the time for root cause analysis for anomalies in system behaviors. It can analyze workloads on AWS, Azure and GCP.

It installs a lightweight agent on each target system which aggregates information from processes running on the system into a centralized customer specific (MT) data warehouse (Snowflake on AWS)  and then analyzes the information using machine learning to generate behavioral profiles and then looks for anomalies from the baseline profile. The design allows automating analysis of common attack scenarios using ssh, privilege changes, unauthorized access to files.

The host based model gives detailed process information such as which process talked to which other and over what api. This info is not available to a network IDS. The behavior profiles reduce the false positive rates. The graphical view is useful to drill down into incidents.

OSQuery is a tool for gathering data from hosts, and this is a source of data aggregated for threat detection. https://www.rapid7.com/blog/post/2016/05/09/introduction-to-osquery-for-threat-detection-dfir/

Here’s an agent for libpcap https://github.com/lacework/pcap

It does not have an intrusion prevention (IPS) functionality. False positives on an IPS could block network/host access and negatively affect the system being protected, so it’s a harder problem.

Cloud based network isolation tools like Aviatrix might make IPS scenarios feasible by limiting the effect of an IPS. 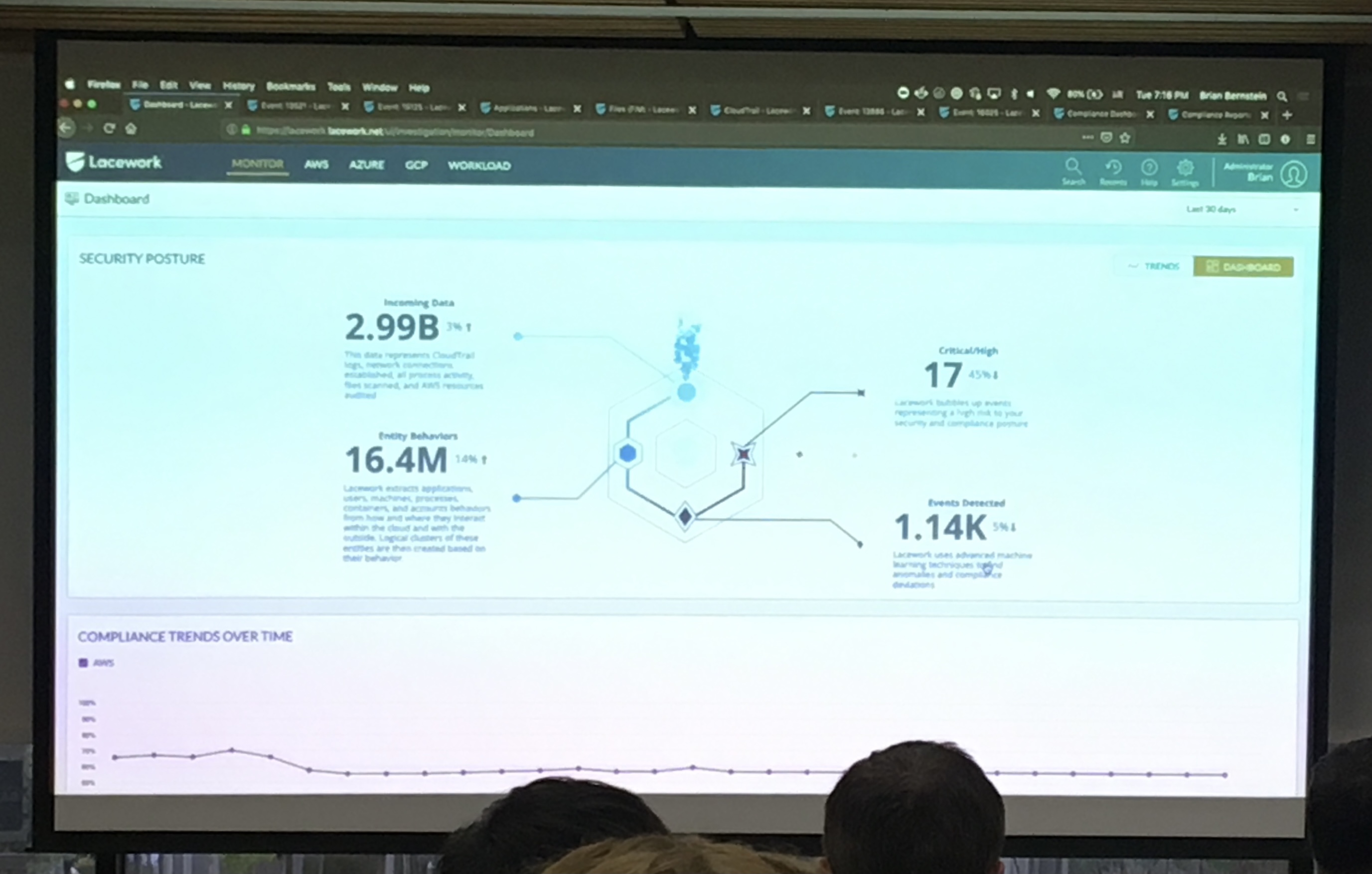