Oracle MICROS Point of Sale systems are again reported to be attacked. The support site of MICROS was infected by malware which was able to access usernames and passwords and send them to a remote server. This remote server was identified as one previously known to be used by ‘Carbanak’, a cybercrime group.

ZDNet reports that in the last year, dozens of machines at Starwood and Hilton hotels were impacted by malware, with the aim of poaching payment and card data, which can be used or sold on to the highest bidder. The attack on MICROS systems may be behind these.

This report by Symantec describes POS attacks as multi-stage attacks, with threats and mitigation strategies.

In August 2014, Department of Homeland Security had issued an advisory for ‘Backoff’ a POS malware, which affected a large number of systems in retailers including Target, PF Chang’s, Neiman Marcus, Michaels, Sally Beauty Supply and Goodwill Industries International.  PF Chang had a cyber insurance policy which covered direct damages, but not claims filed by Mastercard/Bank of America for credit card fraud reimbursements and reissuance via a “PCI DSS assessment”.

These trends are interesting for a few reasons. First, the recurrent attack are reason to accelerate the move to EMVs. Second, it gives rise to new architectures for payments. Third it draws attention to Blockchain technologies.

Verifone has a Secure Commerce Architecture which sends the payment data directly from the terminal system which receives the card, and the merchant (acquirer) bank, without touching the POS system. This reduces payment fraud and also makes certification for EMVs much easier. 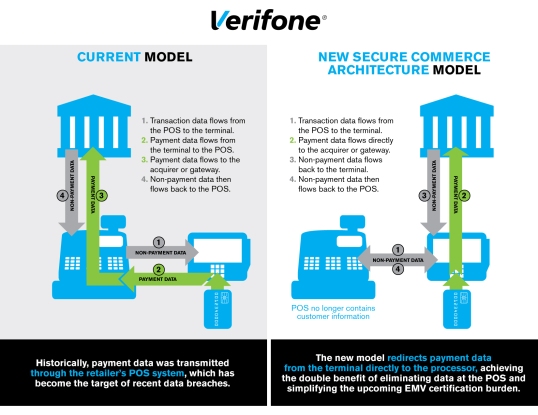 EMV stands for Europay, Mastercard, Visa. After the EMV deadline of Oct 1, 2015, the liability for credit card fraud shifted to whichever party is the least EMV-compliant in a fraudulent transaction. Automated fuel dispensers have until 2017 to make the shift to EMV. ATMs face two fraud liability shift dates: MasterCard’s in October 2016 and Visa’s in October 2017.

Because of EMV securing the terminals, there is predicted to be a rise in online payments fraud.  While counterfeit opportunity dwindles, the next top three types of credit card fraud, Account takeover, Card-not-present fraud, and (fake new) Application fraud are rising. The recent MICROS attack fits the pattern of attackers probing for and finding the weakest links in the payments chain.