A block diagram of docker is below and a description of docker daemon is here. The docker client commands talk to the docker-daemon to start one of the containers in the docker registry, or to start a process described in the command line as a new docker container. Docker provides a simple interface to linux container technology which is a lightweight VM. 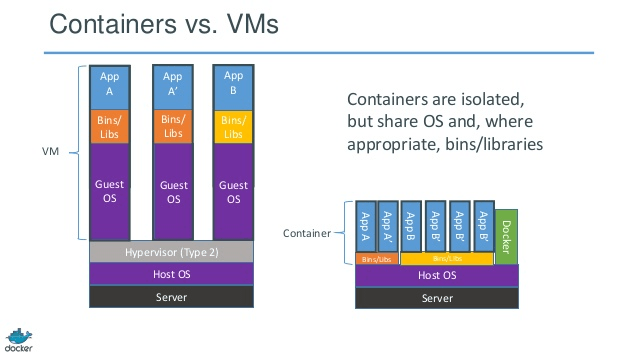 For access control to the docker daemon there is activity with a design doc here.

Twistlock is a container security and monitoring tool that attempts a comprehensive approach – access control to the containers, runtime scanning of files for malware signatures, vulnerability scanning, looking at network packets, so on. A recent meetup on Dec 1 discussed this product. It features integration with Kerberos and LDAP.

In terms of the kernel,  processes from all containers share the same kernel, the same networking layer. So what’s the level of isolation provided to container processes. This depends on vulnerabilities in the processes themselves – how many ports are open, whether injection attacks are possible etc. If two containers are running processes and a process from the one attacks a process from another – for example memory scraping, then Twistlock can detect it only if it can identify the offending process as malware using signature matching.

A Dockerfile is used to specify a container image using commands to spec the base os, rpms, utilities and scripts. USER specifies the userid under which the following RUN, CMD or ENTRYPOINT instruction run. EXPOSE specs a port to be opened for external access. A docker image is built from the dockerfile and contains the actual bits needed for the container to run. The image can be loaded directly or pushed to a docker registry from  which it can be pulled to clients.